This is a small exhibit in the underground facilities at Princess Caroline’s Battery. The exhibit contains artefacts from the Battery as well as a Memorial Chamber containing the Roll Call of the Regiments that have served in Gibraltar since 1704.

The Military Heritage Centre is housed in a decommissioned battery known as Princess Caroline’s Battery, which was named after King George II’s third daughter and was built in 1732. Most visitors to the Rock tend to miss the entrance to this exhibit which is down a narrow set of steps to the underground magazine.

These chambers were further developed in 1905 to service the coastal defence 6 inch gun which was mounted on top of the magazine. This early photograph shows the gun at the location of where the flag poles are in the top photograph.

The actual Battery still houses the original hoists used to arm the gun, as well as the shells and other artefacts used in those days. the armoury displays a selection of weapons used by the British Army in Gibraltar and there are also relics dating from the Great Siege of 1783 to the present day.

On the other side of this wall were stored the explosive charges used to propel the shells of the 6 inch gun mounted on top of this magazine. Lanterns in the three small window opening’s lit the next chamber without the danger of taking a naked flame into it. When required, charges were passed through the opening at floor level and then raised by the vertical hoist to the gun crew above.

Elaborate precautions were taken to avoid the risk of an accidental explosion – which could be caused by even a single spark. In order to enter the cartridge store, soldiers had to completely change their clothes and even put on special shoes. This was done in the annex next shown in the photo.

The cartridge store has now known as the Memorial Chamber, visitors have the opportunity to honour and remember all those men and women who have over the ages dedicated themselves to the service of the Nation in the Armed Forces. You will find the Roll Call of all the Regiments that have served in Gibraltar since 1704 together with the ensigns of the Senior Service and the Royal Air Force, all of whom have contributed to the peace and prosperity that we enjoy today.

In this photograph you can see the other side of the dispensing hatch shown in the photograph above. 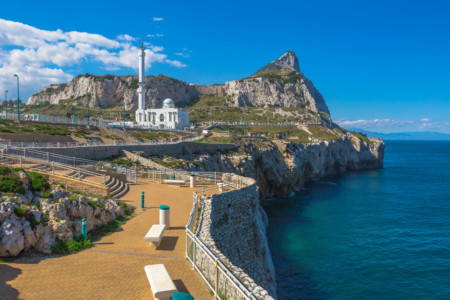