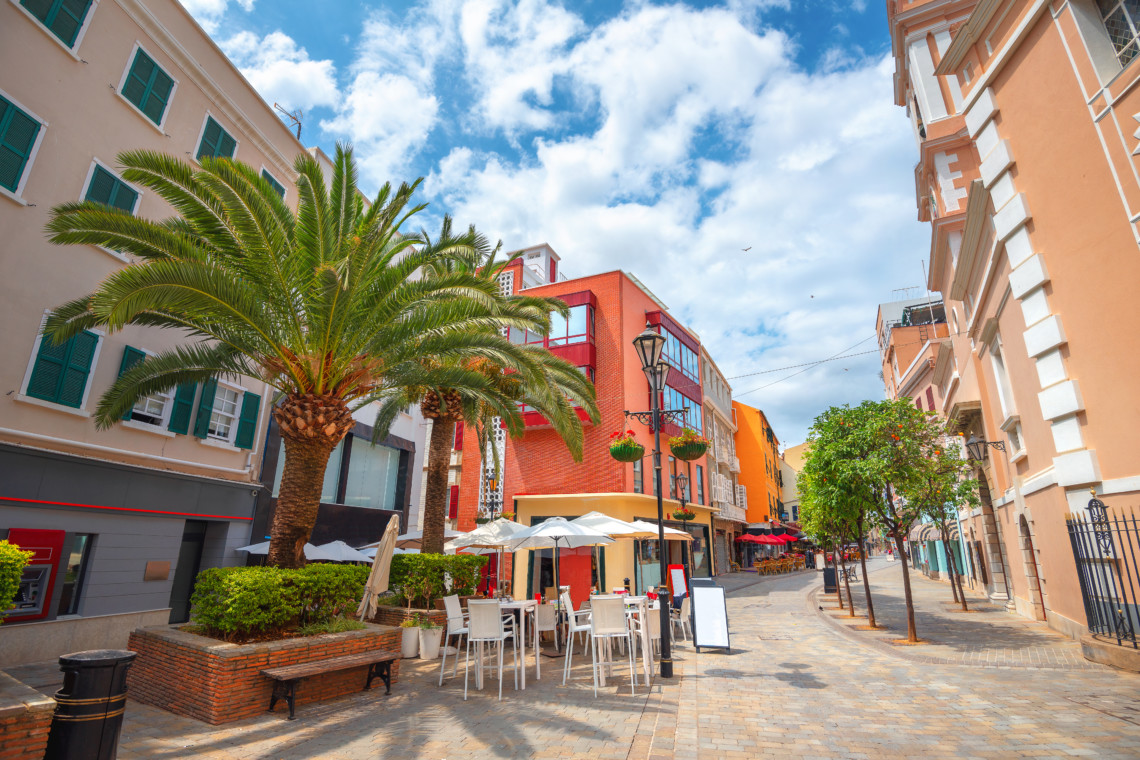 The City of Gibraltar is enclosed by impressive fortress walls, the oldest being those of the Moorish Castle complex. Narrow passages and steps which climb steeply between the buildings can be found in the upper part of the town. The Gibraltar Museum is a must for the visitor with an academic interest in Gibraltar, this includes military and archaeological artefacts especially remains of Neanderthal man. There are many important buildings and churches which can be visited.

Gibraltar’s great fortified wall has more history associated with it than most other walled cities or towns in western Europe. The wall and its defensive Bastions still stands today amidst the expansion of the modern city. The wall represents over 800 years of Moorish, Spanish and British history.

This area of Gibraltar has been given the local nickname of THE JUNGLE because of its overgrown and derelict state. It is however one of the most significant sections of Gibraltar’s defences. Sadly it can not be visited by tourists nor is it in any condition for tourist viewing. There is extensive tunnelling dating back to 1789 as well as surface fortifications covering the area. We hope the information and photographs in this section will help you understand the historical importance of the area.

The Moorish Castle was originally a fortified complex of gates and walls dating back to 1068 AD. Most can still be seen amongst the modern housing built in and around the walls. The Tower of Homage sits at the highest point in the fortifications and an impressive Gatehouse is tucked away amongst the modern buildings further down.

The city of Gibraltar is small, a person can walk from one end of Main Street to the other in about fifteen minutes, so for the purposes of this website the downtown area is referred to as the TOWN AREA, embracing the fact that most places of interest are a short walk from each other.

This area includes the following

Almost all visitors to Gibraltar enter the town through Casemates Square, from here Main Street leads southward. During Spanish times this area formed part of the old town, Villa vieja, which was walled with its own gates and towers. It came to be called Casemates which means “a vaulted chamber in the thickness of the ramparts of a fortress”. During the siege of 1727 so much damage was caused to this heavily built up area that the British decided to raise all buildings to the ground and create an esplanade.

Also known as Royal Street, Main Street crosses from north to south and is Gibraltar’s main artery. It ran through the centre of the old quarters of the town which lay along a narrow fringe between the rock and the sea. As Gibraltar has grown in size, Main Street has remained the hub of business and commerce and was recently pedestrianised so that it is no longer open to traffic. Both sides of the street are lined with attractive Italian style buildings with beautiful forged iron balconies. Almost every building on Main Street now has a shop on the ground floor. Upper floors provide residential accommodation or have been converted into offices.

This area includes the following

During the nineteenth century it was named Commercial Square and auctions were sometimes held there. In 1940 it was renamed in honour of John Macintosh, a great local benefactor. His bust can be seen there today.

The House of Assembly

The building was built in 1817 by the Merchants of the Exchange and Commercial Library. The local merchants felt strongly that there was a need for such a building for their purposes. This building is now used as the House of Assembly, the meeting place for Government and opposition.

Cathedral of Saint Mary the Crowned

This cathedral was built by the Spanish in 1462 on the site of the old mosque of Gibraltar. The old mosque was much larger than the current building and included a typical court with moorish pillars and arches. The Cathedral’s small courtyard is all that remains of the mosque’s court. The Royal Arms of King Ferdinand and Queen Isabella can still be seen engraved on a slab which was moved from the north gate to the courtyard where it can be seen today. The building was heavily damaged during the Great Siege and in 1810 the Cathedral was rebuilt. In 1931 the Church was restored and the current grand facade was erected to replace the poorer one built back in 1810.

The Gibraltar Museum is housed in a building which was used as a bomb house during the eighteenth century. The Museum was inaugurated in 1930 and is a must for the visitor with a more academic interest in Gibraltar. The collections include military and archaeological artefacts as well as an extraordinary piece, the first skull of an “apeman” to be found anywhere in the world was discovered in Gibraltar in 1848. It was first mentioned in the minutes of the Gibraltar Scientific Society for March, 3, 1848. Unfortunately it’s importance was not recognised until 1864 and the type of human represented is now known from a discovery made in the Valley of the Neander (Neanderthal) near Dusseldorf in Germany, in 1856.

Two rooms are especially dedicated to the 1704 British invasion and to the Great Siege, and a big scale model reproduces all the streets of the city as it was in 1865. A section of the museum is also dedicated to flora and fauna on the Rock.

The Medieval Moorish Baths can be visited within the Museum. In 1906 an authority on Moorish antiquities enthused about its exceptional interest, “Except in the Alhambra, there is nothing in Spain to compare with it”. The baths central room has a sixteen-sided vault roof supported by arches on polished columns.

The Anglican Cathedral of the Holy Trinity

It is as a result of the Cathedral of the Holy Trinity being raised to ‘Cathedral Status’ that Gibraltar became a city. The Scroll signed by Queen Victoria is housed in the vestry. The Cathedral of the Holy Trinity is the mother church of the largest Anglican Diocese in the world, the ‘Diocese of Gibraltar in Europe’. Building of the Church commenced in 1825 but was not completed until 1832. Its walls were built with extra thickness to withstand the blasts from heavy guns in the nearby King’s Bastion. Some years would pass before it was consecrated in 1838, in a ceremony presided by Queen Adelaide, widow of William IV.

After British occupation, this Franciscan Chapel (Saint Francis’ Chapel) was converted into an Anglican Church for the local garrison.

Since 1704, the Convent has been the residence of the Governor of Gibraltar. It was built in the sixteenth century as a Franciscan Friars’ Monastery with a magnificent cloister as its centre. The facade was reconstructed in the nineteenth century in gothic style with red bricks.

There are many aspects of Trafalgar Cemetery which make it worth a visit, it is wonderfully peaceful place amid the hustle and bustle of daily life in Gibraltar.

Despite its name, there are only two graves containing the remains of victims from the famous Battle of Trafalgar. However, amongst the other graves there are head stones referring to victims of naval actions off Algeciras, Cadiz and Malaga. Other graves contain the remains of other members of HM forces and their families between 1708 and 1835, many were victims of yellow fever epidemics.

The cable car is one of three main ways of accessing the Upper Rock, the others being Taxi Tours and Walking.

Gibraltar’s botanic gardens were first created in 1816 as a place of tranquillity for the public and members of the garrison to stroll in peace. Now, plants from all over the world can be found in the gardens.

This old and dilapidated footpath is the quickest way to get to the Nature Reserve by foot from the town. The beginning of the trek leads up what is locally known as Union Jack Steps, a series of steps which have a Union Jack painted on the side of them which can only be seen from the bottom of the steps looking upward. This painting is from the time of the referendum of 1967.

The path intersects with a road leading up to Devil’s Gap Battery which in turn leads to the Apes Den where visitors can have their first full scale encounter with the semi-wild monkeys.

A library for use by the garrison was established in 1793 and was housed originally in a building on Main Street. As the library grew in size, a larger building was required and the British Government agreed to fund the construction of the imposing colonial style building which exists today.

The library grew to well over 30,000 books and was believed to be the finest English Language library outside England.

PLEASE NOTE THE GARRISON LIBRARY IS AN INDEPENDENT BODY WHICH IS NO LONGER ASSOCIATED WITH ANY MILITARY OR GOVERNMENT AUTHORITIES, IT IS NOW A RESEARCH LIBRARY OPEN TO THOSE WITH RESEARCH REQUIREMENTS

The upper town is full of narrow passages and stairways. As mentioned before, the town is small and is built on the slope of the west side of the Rock, it is almost impossible to get lost, you either travel uphill or downhill to intersect with some part of Main Street.

The Museum has many rooms from which the locations listed above have been chosen. Exhibits include a wide range of objects, as…